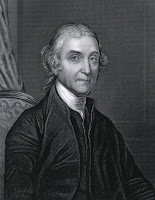 Two years ago I sat in my creative space wondering about the author of a quote on a card that had been propped on my desk for several years.  That sublime combination of words was a gift to my creative beginnings each and every time I sat down to make stories or art.  The card attributed the quote to Joseph Priestley, and to that card, I will be forever thankful.

Quote as it reads on the card:
“I have always been delighted at the prospect of a new day...
with perhaps a bit of magic
waiting somewhere behind the morning.”
Joseph Priestley
Who was Joseph Priestley anyway?  His delight in a new day of discovery was so like mine. I had to know more, and so this certified librarian headed straight to the Internet.  Bingo! I found information galore. I loved the man already; he and I shared the same birthday. Double Bingo! Albeit his was honored in a time of the Gregorian calendar.

Of course I was impressed that this man was an 18-century natural philosopher, a chemist, an educator, a clergyman, and an English dissenter interested in religious and social reform. Even more marvelous on the screen before my eyes was the story of this relentlessly curious and self-trained chemist who discovered OXYGEN. Yes, this was the fellow that could come up with the inspirational quote that I held so dear. WRONG!

Before I explain myself, let me say that Joseph Priestley, this rock star of the 18th century, captured my sense of wonderment like a lightening bolt and sent me headlong into a yearlong investigation. It is always amazing to discover another human who has similarities to one self, but one from 1700’s was even more of a thrill.  I am one hundred percent sure that Joseph delighted in the prospect of new day led on by his own curiosity and search for the truth.

Joseph made discovery after discovery in the field of gases or “airs” as they were called in his day. All of those discoveries were fueled by his one question, what is common air anyway?  Common air was the term of the day for all those elements floating around everyone.

Joseph tested his oxygen hypothesis at least three times for absolute certainty of results. On August 1, 1774 using a very pure lump of mercurius calcinatus that he carried all the way from France, and the strength of a burning lens, Joseph was sure that his hypothesis was correct. He didn’t come up with the word oxygen; his name for this air better than common air was depholgisticated air. Almost simultaneously, Antoine Lavoisier, a French chemist, made the same discovery and is credited with giving the name oxygen to this particular air.

Joseph didn’t stop with oxygen, he moved right along to discover at least seven other gases. To my joy, I learned that Joseph had also discovered how to make homemade bubbly water. BINGO TIMES 3! Again, sparkling water is my beverage of choice.  Not to mention, carbonation has appealed to the rest of the world in a mighty big way. 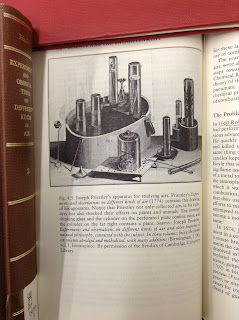 Chemistry apparatus from:  Experiments and Observations on Different Kids of Air by Joseph Priestley (now in the public domain)

Prior the discovery of oxygen, Joseph wrote two definitive books on the properties of electricity under the mentorship of his friend Ben Franklin.  Yes, friend to Ben Franklin, this fellow got around even if he was somewhat of a recluse. Perhaps Joseph was hoarding spare time to play around in his laboratory. His sense of wonder was fuel for discovery. 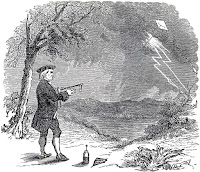 Joseph had an incredibly strong urge to teach and share ideas. Goodness, he is credited as the creator of the modern timeline no less. See image here from public domain. Yes, all great teachers make their own instructional materials if the best tool is not out there.  Way to go Joseph! That’s my salute from the teachers of the world.

My own chase for discovery resulted in a manuscript for a picture book biography.  I have titled it:
Joseph Priestley
The True Story of a Rock Star Scientist and the Discovery of Oxygen

Rock star, yes! The stars aligned. The lightening flashed.  The questions were asked. The ideas were massaged.  Joseph never rested until he had answers. He and other natural philosophers of the time made it their mission to crack the codes of nature. The discoveries were made. And better yet, as the ideas were re-examined, new questions were asked, and the wonderment and betterment of discovery continued.

Here is another marvelous quote made by the real Joseph Priestley. He wrote,

“...Like those who contented in on e of the games of Ancient Greece, I shall immediately deliver my torch to any person who can carry it... if others do the same, it may come into my hands several times before we reach the goal.”

Joseph published his findings quickly knowing there may be errors in his research. He championed the idea that another natural philosopher may take up the task and improve the findings. Nature was a vast world to explore. Working together was the key.

Who actually wrote the inspiring quote?

Now, let’s return to that quote sitting on my desk. Who was the author? Indeed, it was an Englishman, but one born sixty years after Joseph. My inspirational words belong to a British novelist named John Boynton Priestley. Oh my, the card company did need a little fact checking prior to publication. Despite their error, I am ever so thankful that it led me almost three hundred years back in time to make discoveries of my own.

“I have always been delighted at the prospect of a new day, a fresh try, one more start, with perhaps a bit of magic waiting somewhere behind the morning.”

I find the complete version even more compelling. A fresh try... I need these.  One more start, I need those too, and so did Joseph Priestley. I say thanks to both of these Englishmen for inspiring my days. 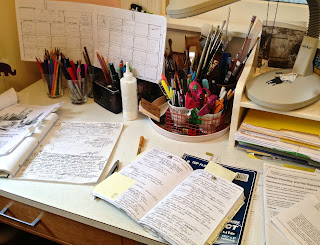 My desk:  Deep in the research process. Note
The photo front of “thee” card is tucked behind the base of my lamp.

Now I have a story to sell with a vision of a picture book biography in the hands of young readers. And, I and am working on a yet shorter version along with a longer version with my own hopes that I hope will inspire young readers to make their own marvelous investigations of our natural world.

Oxygen, oh oxygen...thanks for helping to breath life into my stories.  And thank you to my new friends at the Joseph Priestley house in Northumberland, PA.  They will be having a grand celebration this first week in August. Their support for my research has been nonpareil.  I am forever in their debt. 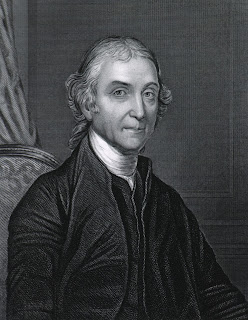 This work has been identified as being free of known restrictions
under copyright law, including all related and neighboring rights.